At Plexus Surgical Video Productions we have produced many video programs on total knee arthroplasty. In this slideshow, we thought you might like to see the salient steps of a TKA procedure as demonstrated from two roving camera angles, using two jib or boom arms, with specialized lighting designed specifically for shooting surgical procedures. 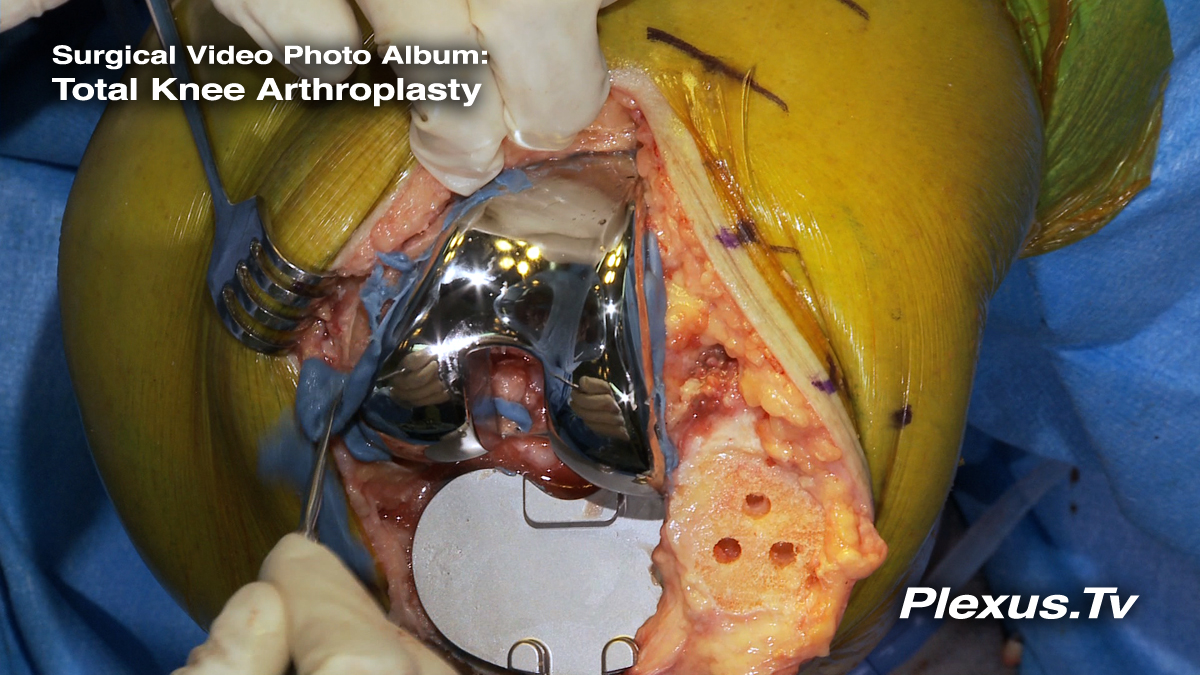 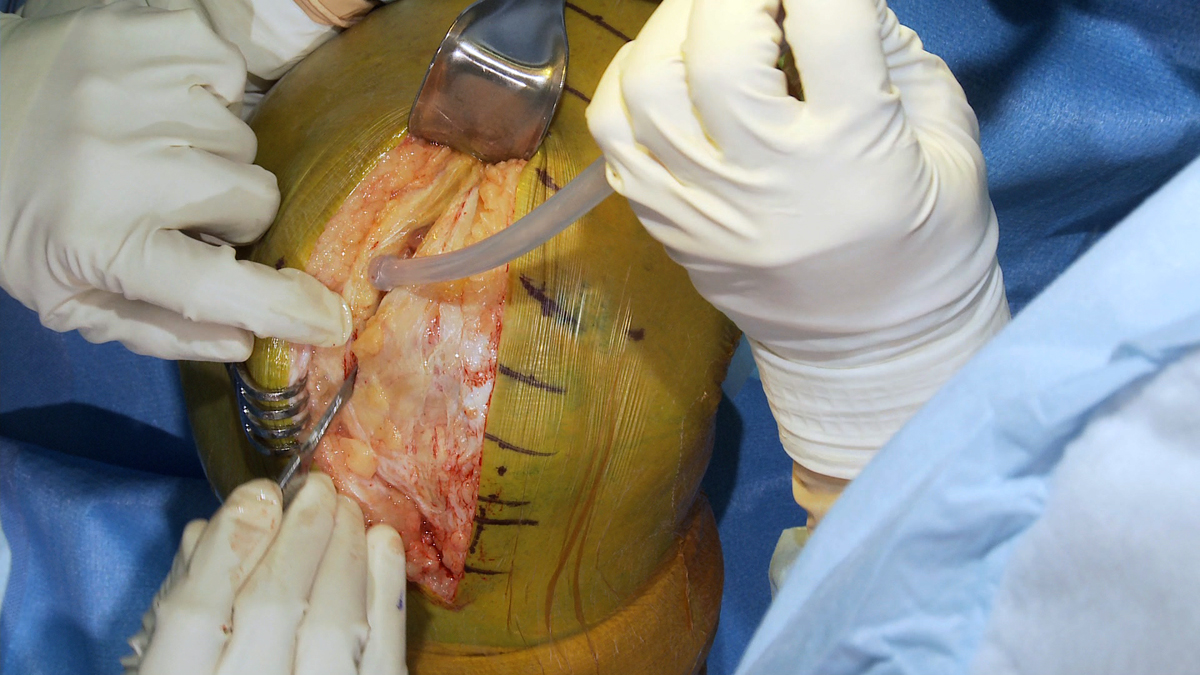 Total Knee Incision
A paramedian incision is made so that the patella can be deflected laterally without violation to the patellar tendon. 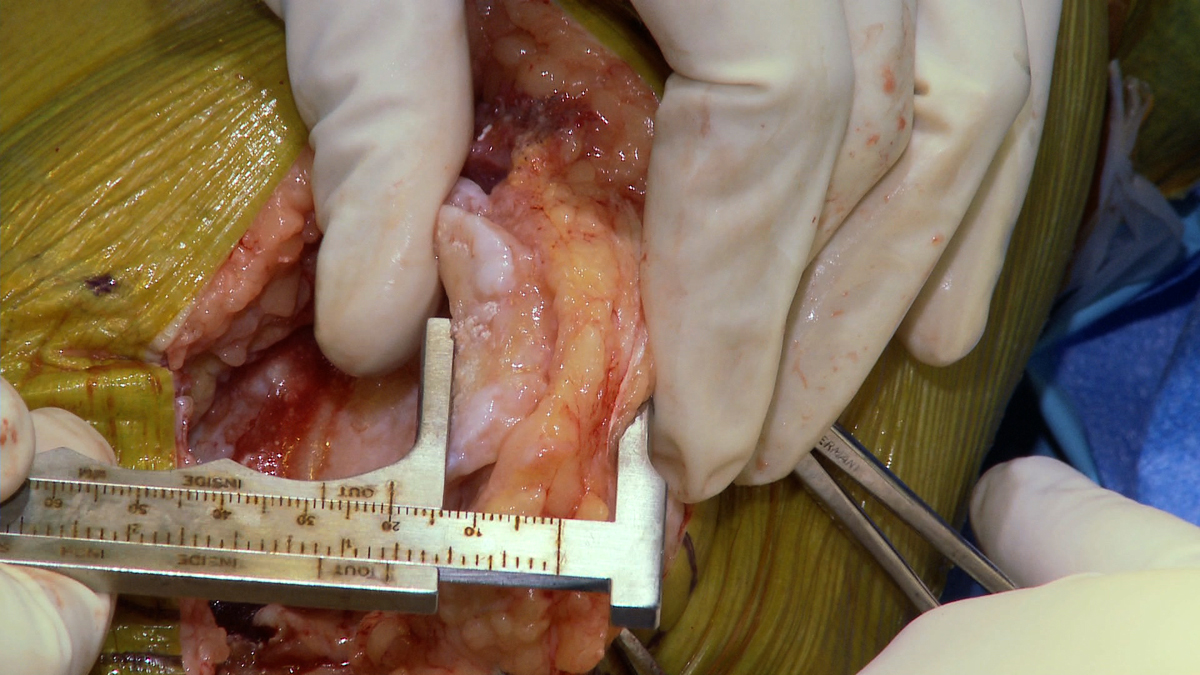 Measuring Patellar Depth
The patella is measured for thickness so the accuracy of the bony cut can be maintained which optimizes patellar component gliding over the femoral component without impeding flexion. 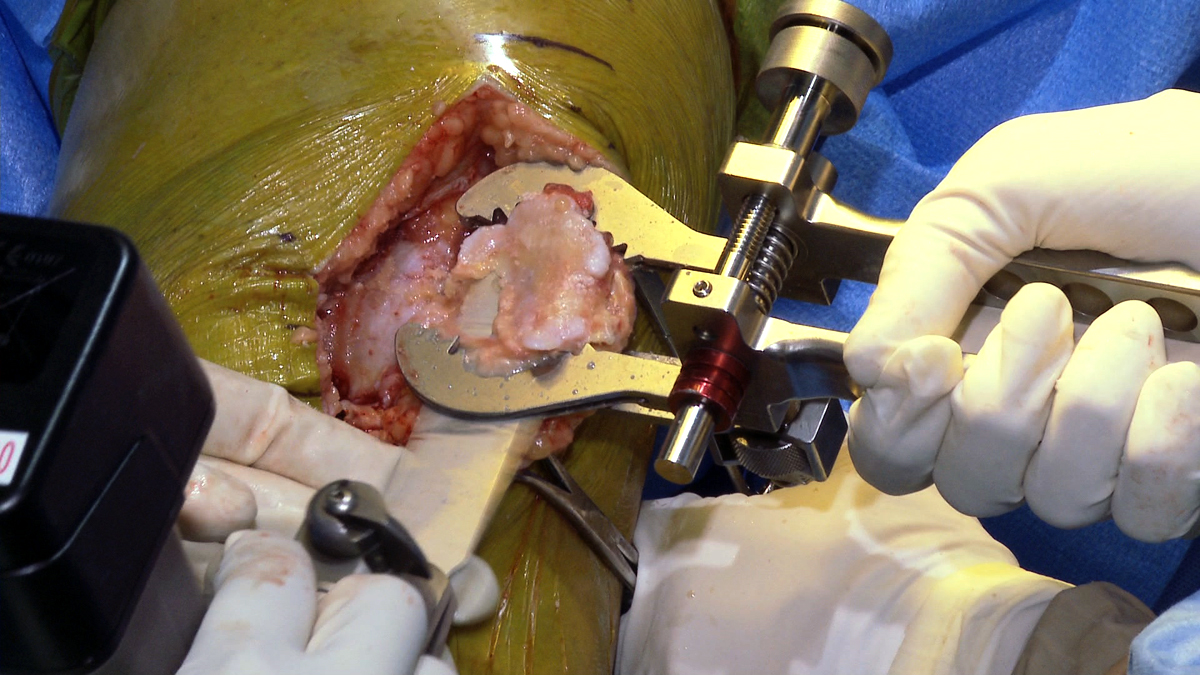 Patellar Osteotomy
The patellar osteotomy is made using an oscillating saw with a clamp that guides the depth of the cut. 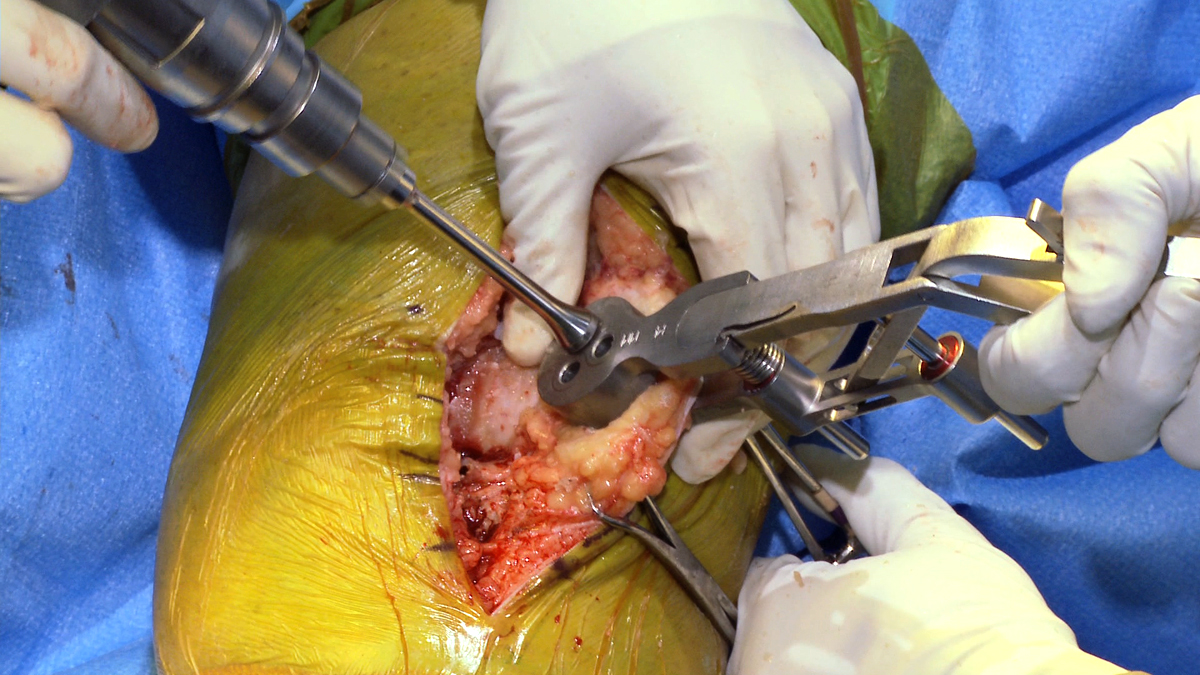 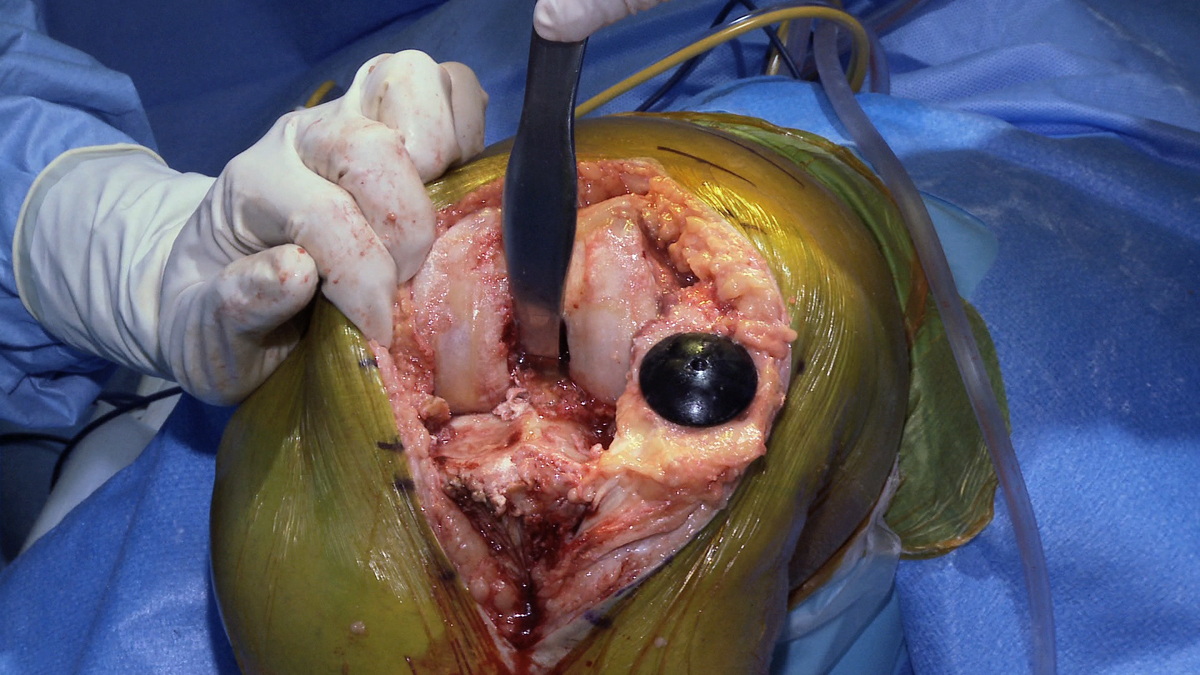 Leveraging the Tibia Forward
A narrow cobra retractor is used to leverage the tibial plateau forward so as to gain exposure for posterior horn meniscus removal. Not the patellar trial component is placed and left in place in order to protect the freshly cut bony surface during the remainder of the surgical maneuvers. 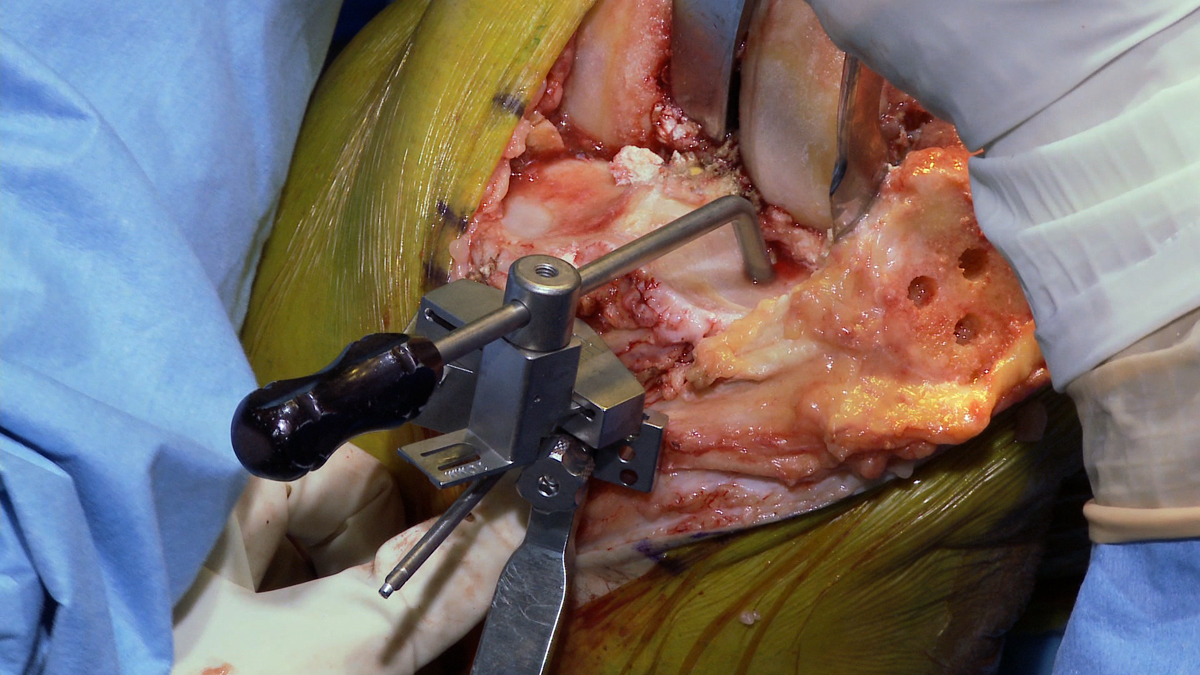 Tibial Osteotomy Measurements
Tibial osteotomy measurements are obtained by referencing the talus at the distal end of the leg with the feeler gauge seen here so that accurate cant and depth of the osteotomy can be made. 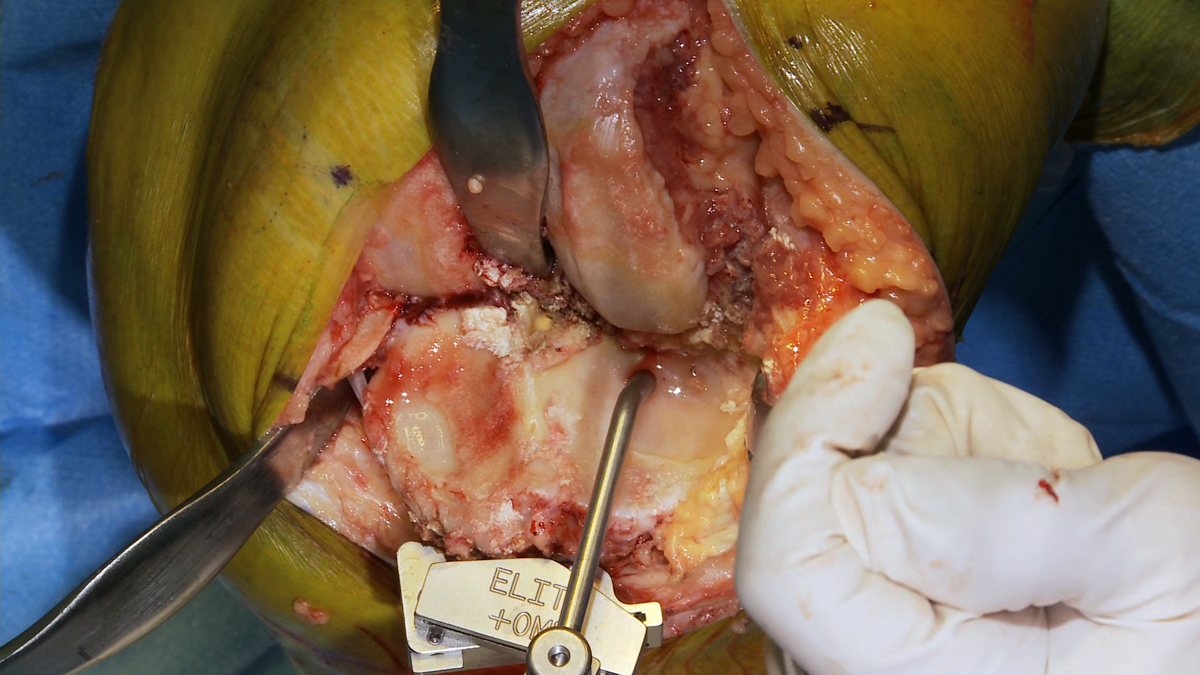 Tibial Osteotomy Measurement
Tibial osteotomy measurement is obtained by referencing the deepest part of the lateral tibial plateau. In all total knee arthroplasty video productions two camera angles must be used at all times to gain the important perspective to demonstrate the teaching points of the procedure. 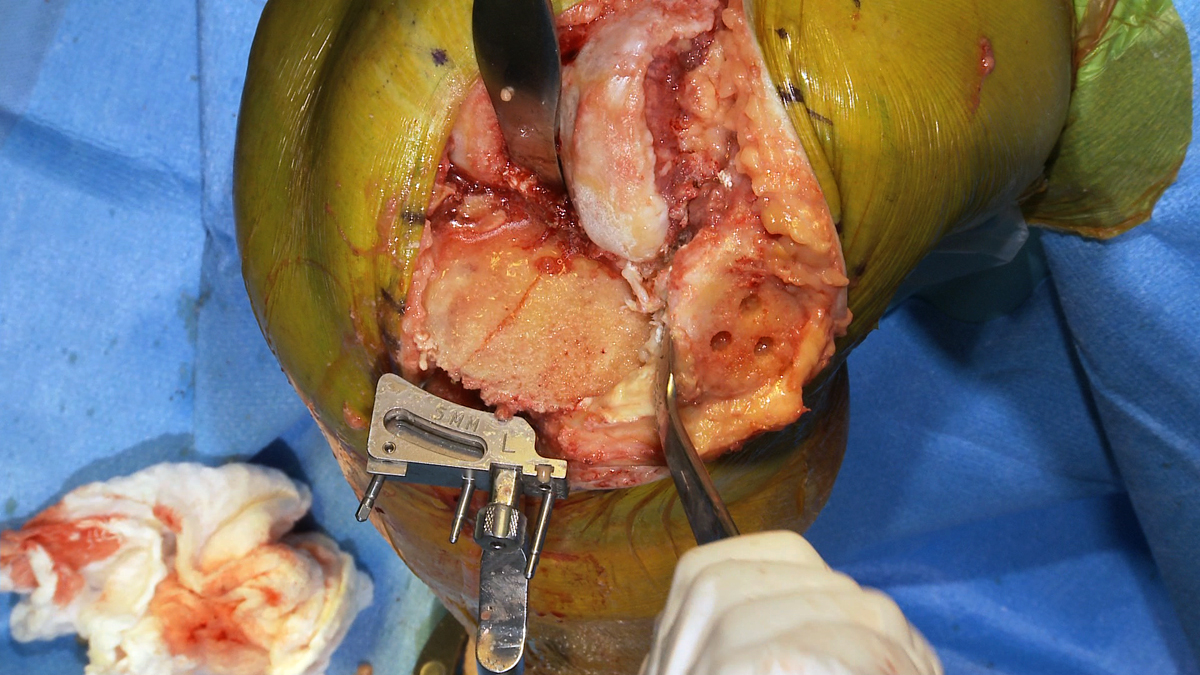 Tibial Cut Made
With the tibial cut made, we can see the even, flat surface from the overhead camera angle. 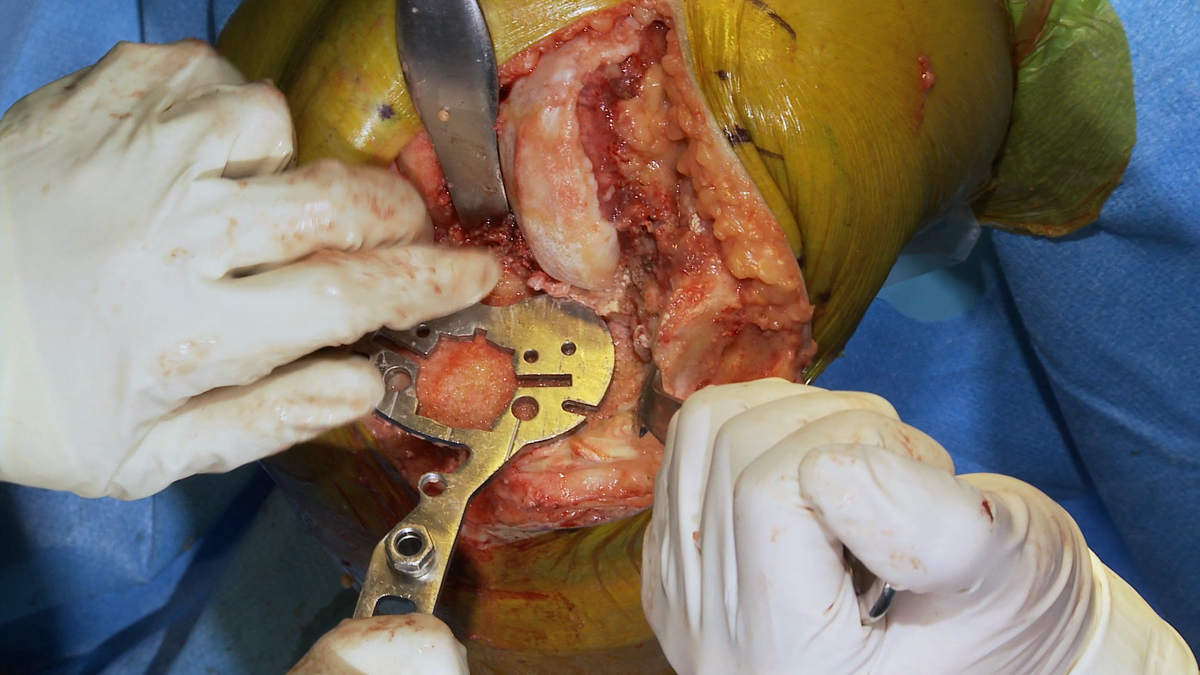 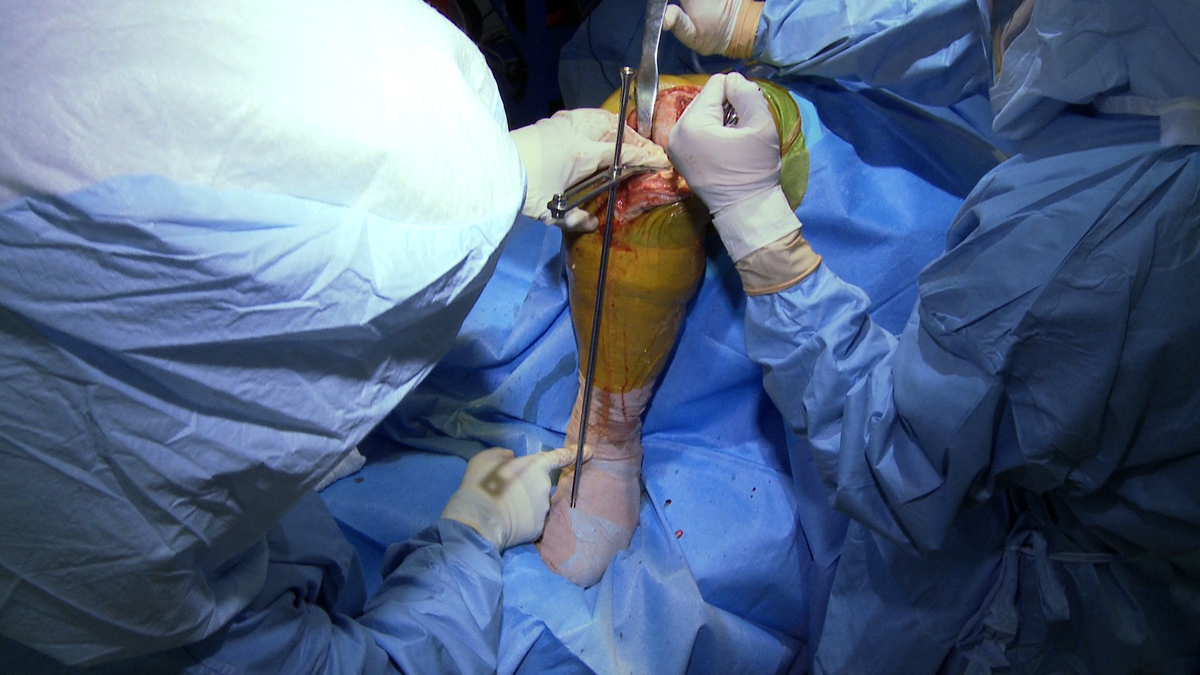 Tibiotalar Joint Centralization
Tibiotalar joint centralization is critical for accurate placement of the tibial component. This reference helps make certain there will be adequate slope to component placement. 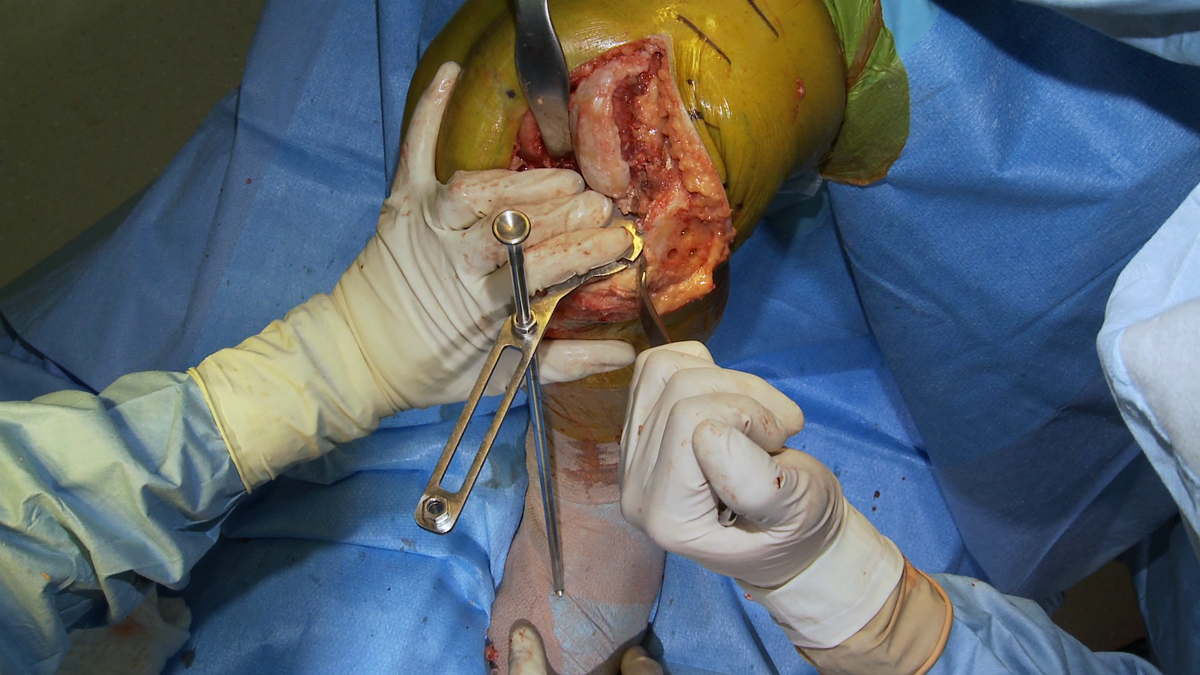 Tibial Component Slope Determination
Again, tibial component slope determination is best seen with two camera angles, both with jib or boom arms, one overhead and the other from a lower angle, so that all the details of total knee arthroplasty can be captured. 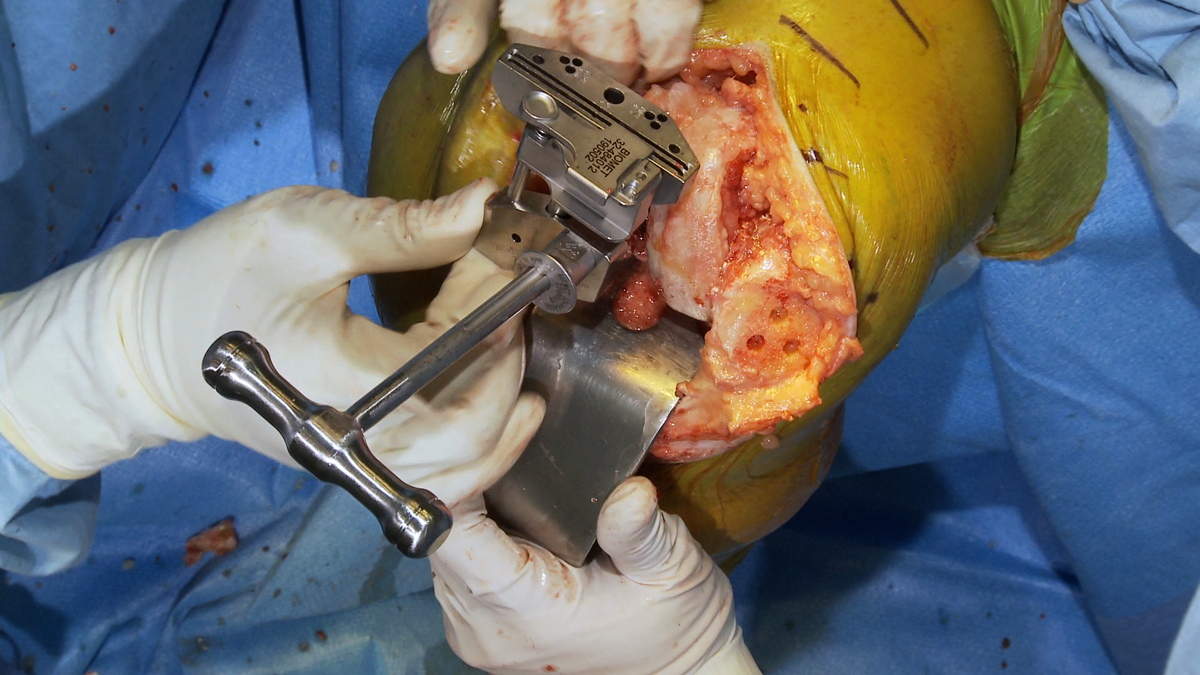 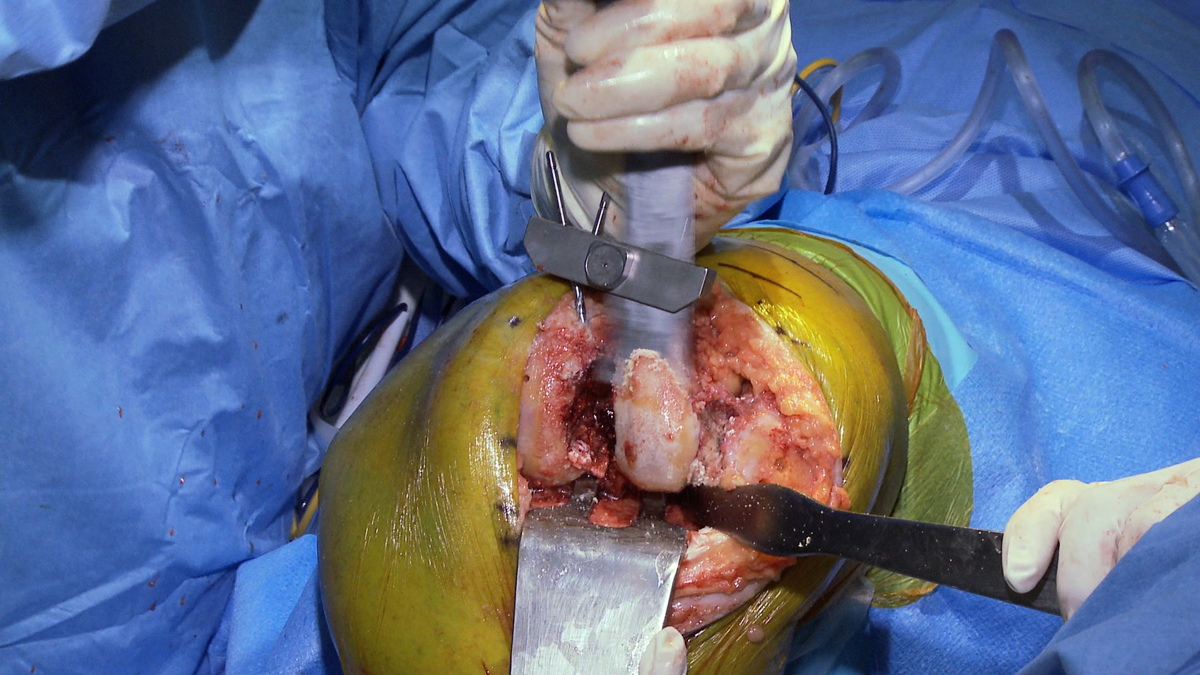 Femoral AP Osteotomy
The femoral AP cut jig is placed by first referencing the femoral canal with a T-handle rod. This aligns the osteotomy with the axis of the femur. 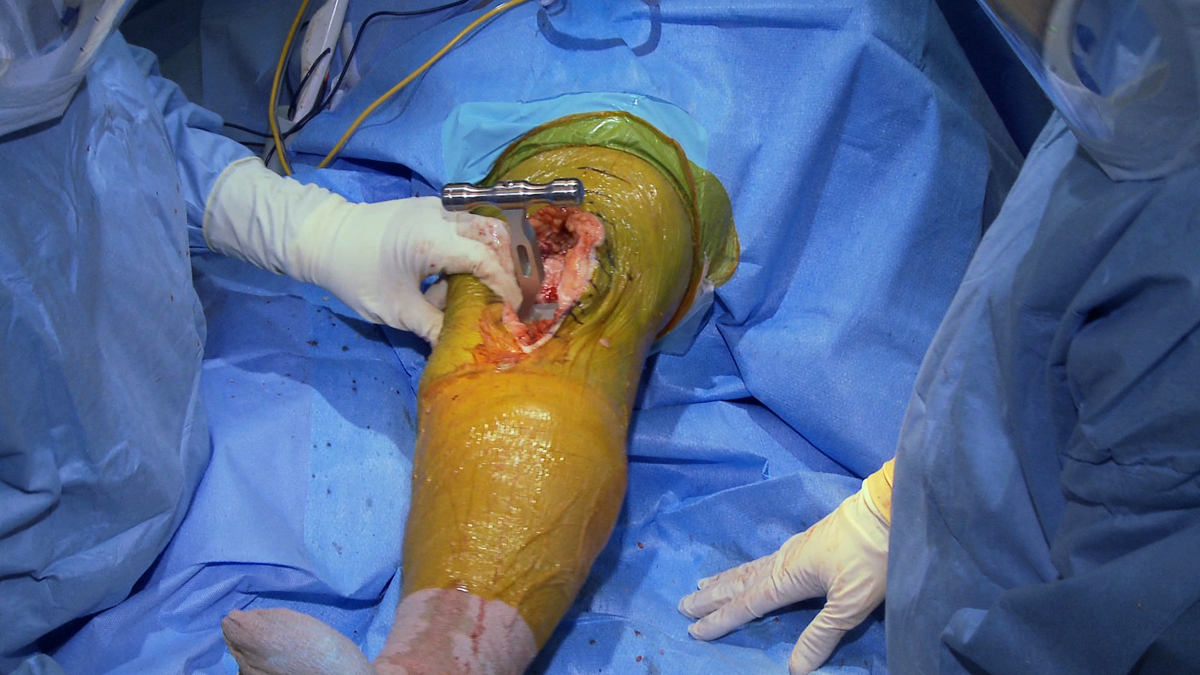 Extension Alignment Test
Extension alignment testing is conducted with a spacer to verify that the AP femoral cuts have been made accurately. 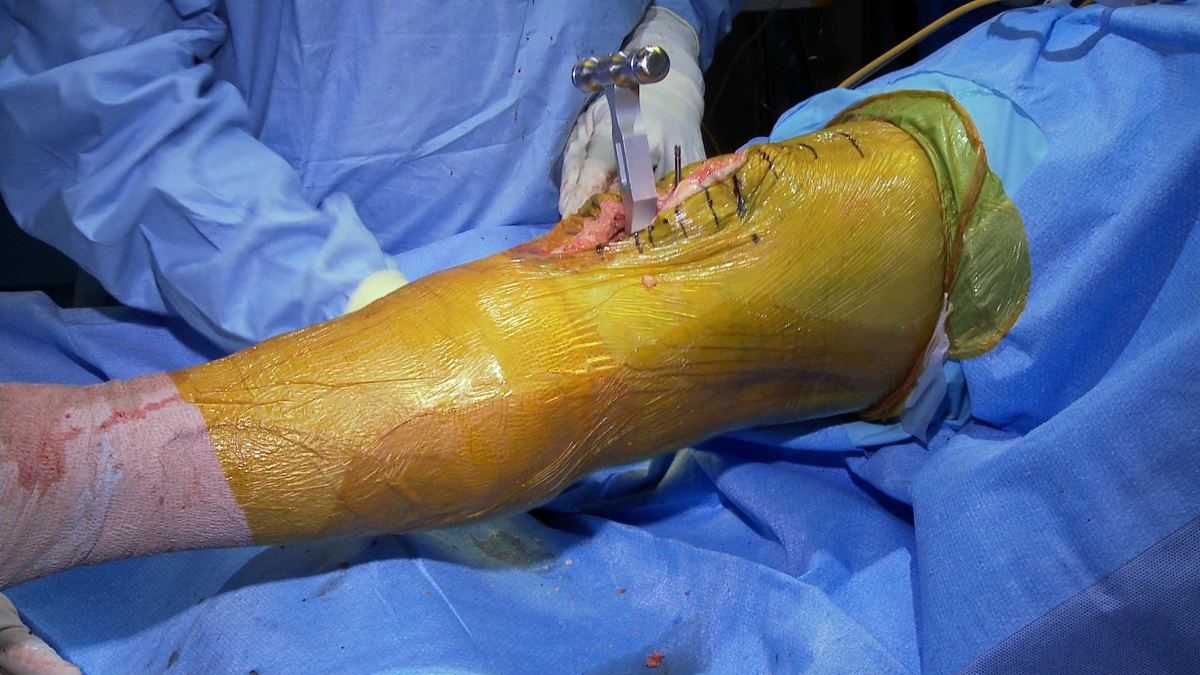 Extension Adequacy Test
Extension adequacy test can be seen from this AP camera view demonstrating that full extension is achieved. It is important that the surgical video crew does not slow the surgeon down so using two cameras is essential so that important teaching point angles can be captured without delay. 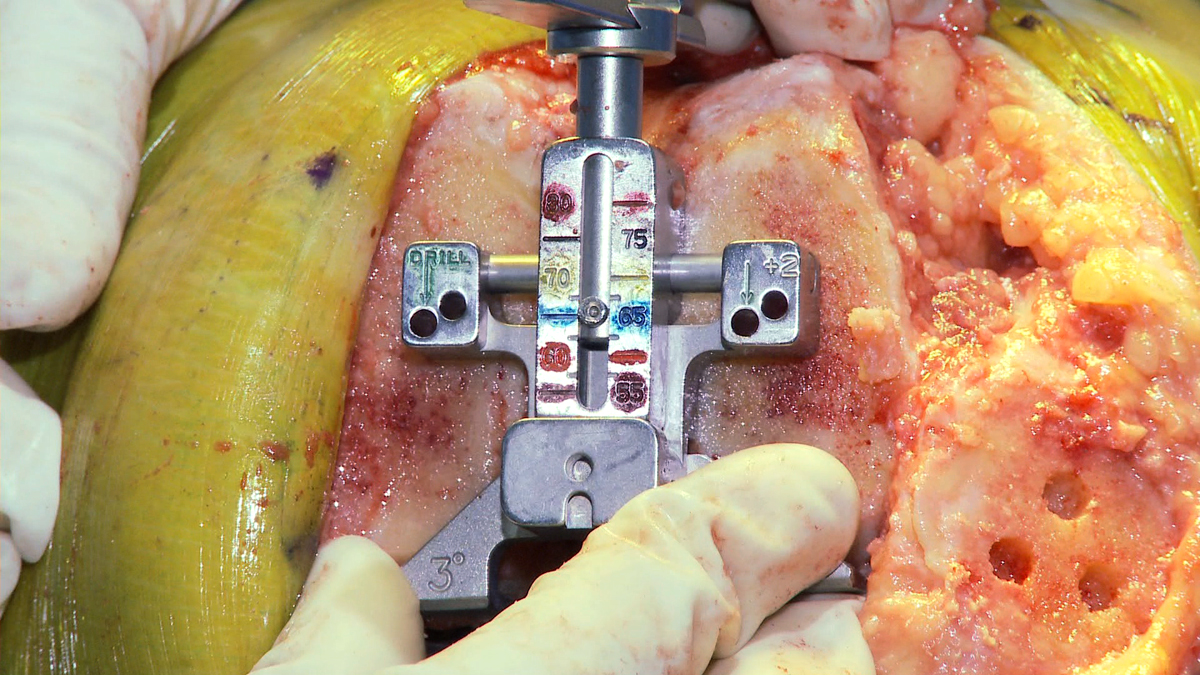 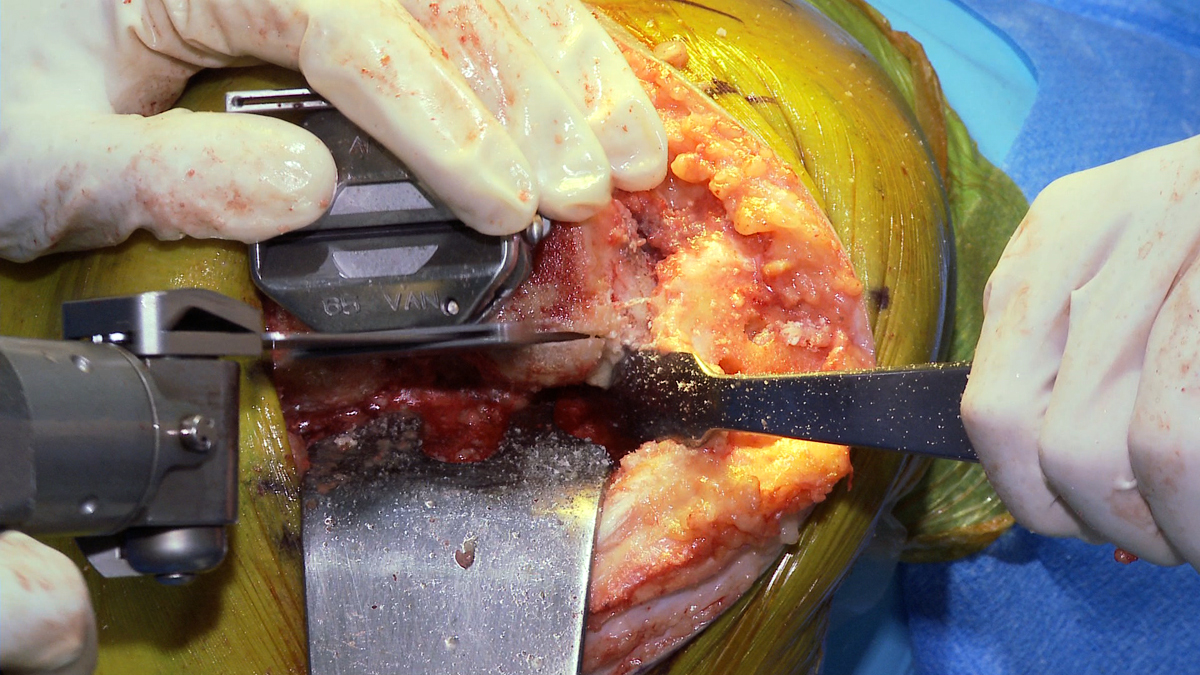 Posterior Osteotomy
The posterior osteotomy is made with an oscillating saw. 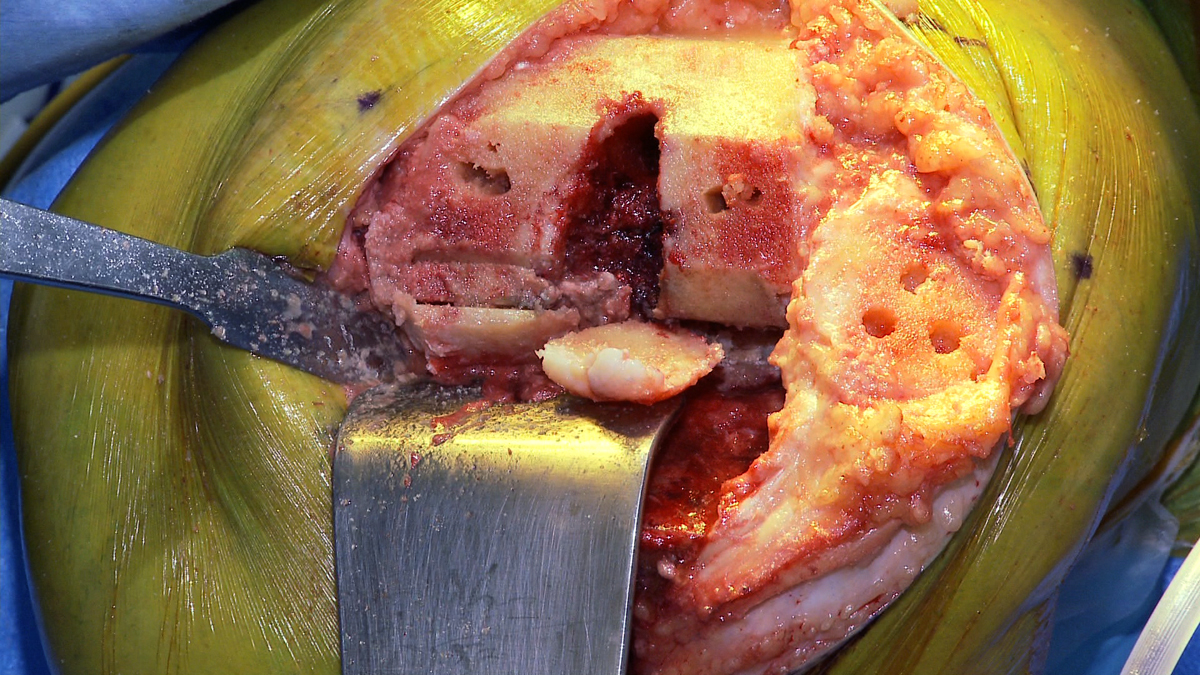 Osteotomy Fragments Removed
Osteotomy fragments are removed using an osteotome. Note the angle cuts have been made at this stage as well. 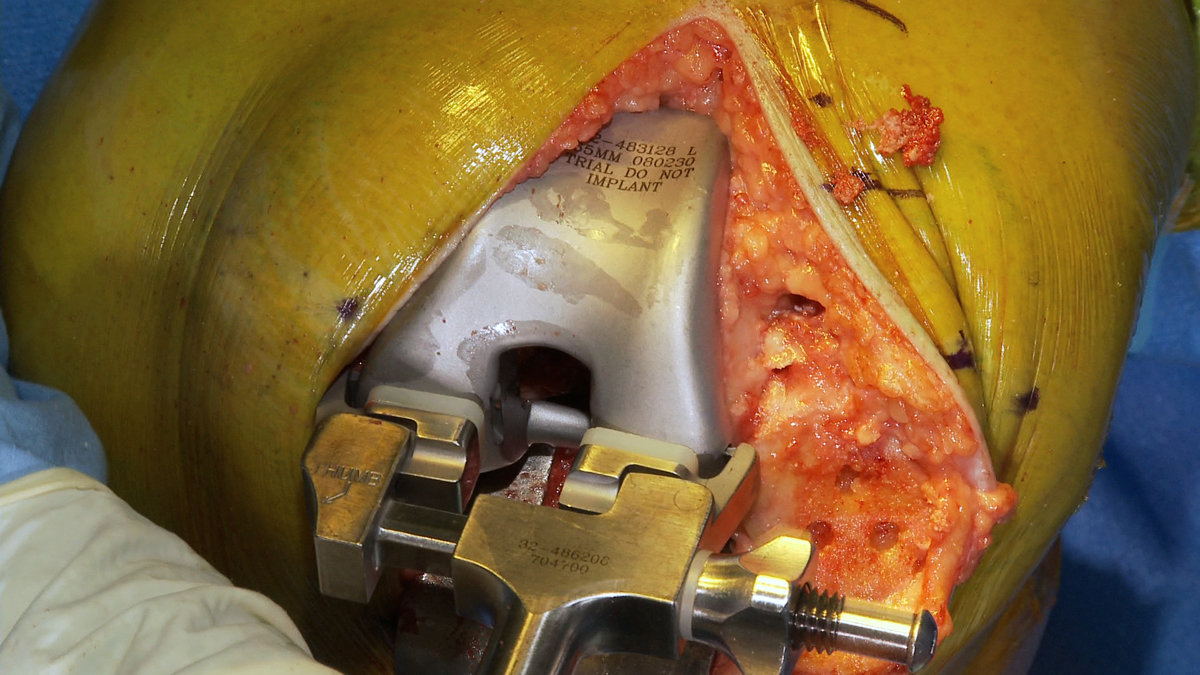 Trial Femoral Component
The trial femoral component is placed to check alignment, flexion and extension of the leg. 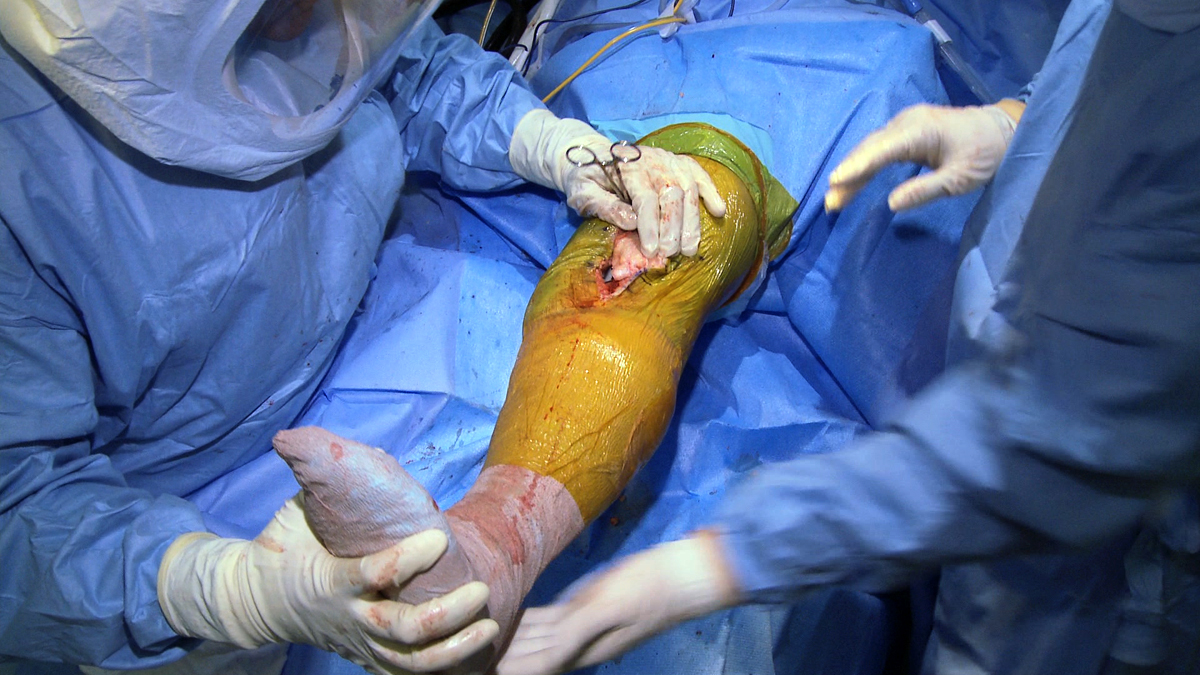 Leg Extension Test
A leg extension test is done to determine that full extension is achieved. 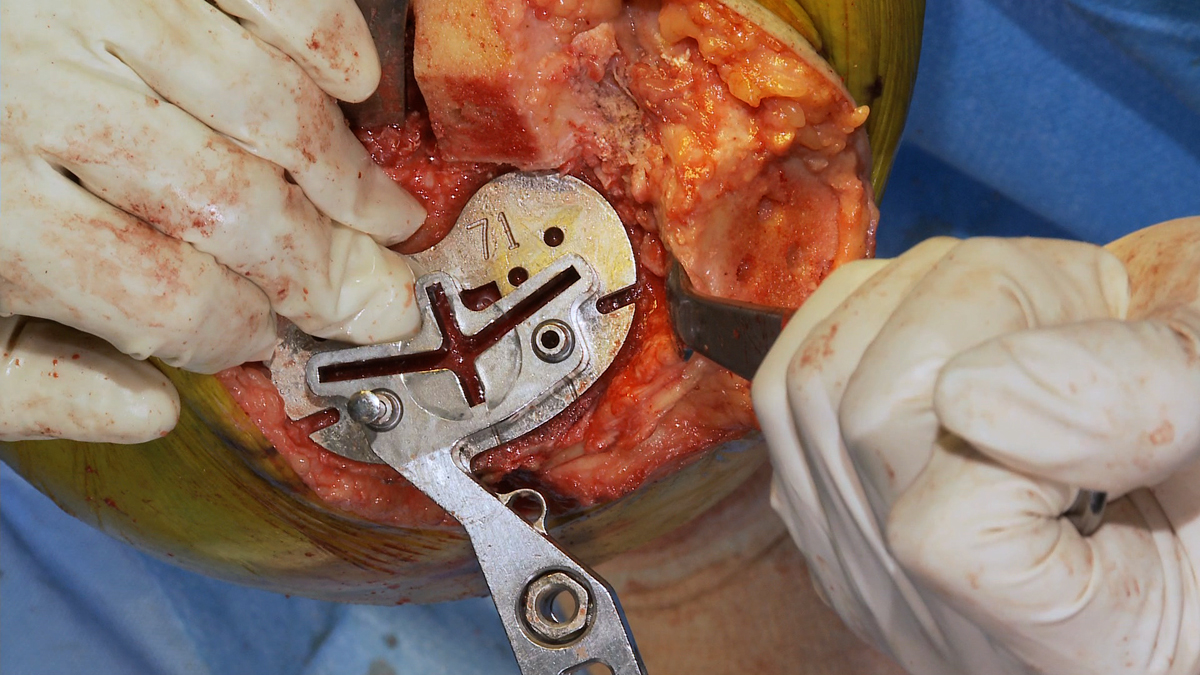 Tibial Tray Rotation Alignment
Tibial tray rotation alignment is determined again by referencing the axis of the tibia with the central portion of the tibiotalar joint. Pins will be placed to stabilize this jig and then a broach will be used to make that centralizing anchor footprint for the tibial component. 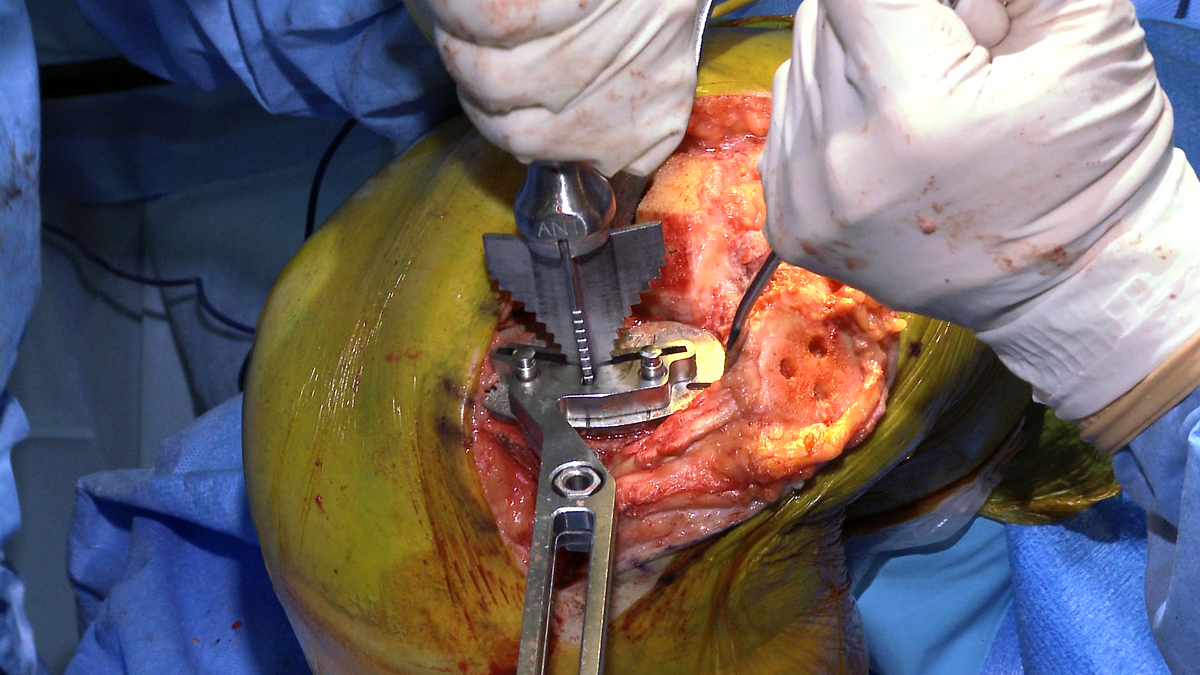 Tibial Tray Broach
The tibial tray broach is then used to establish rotation stability for the tibial component. 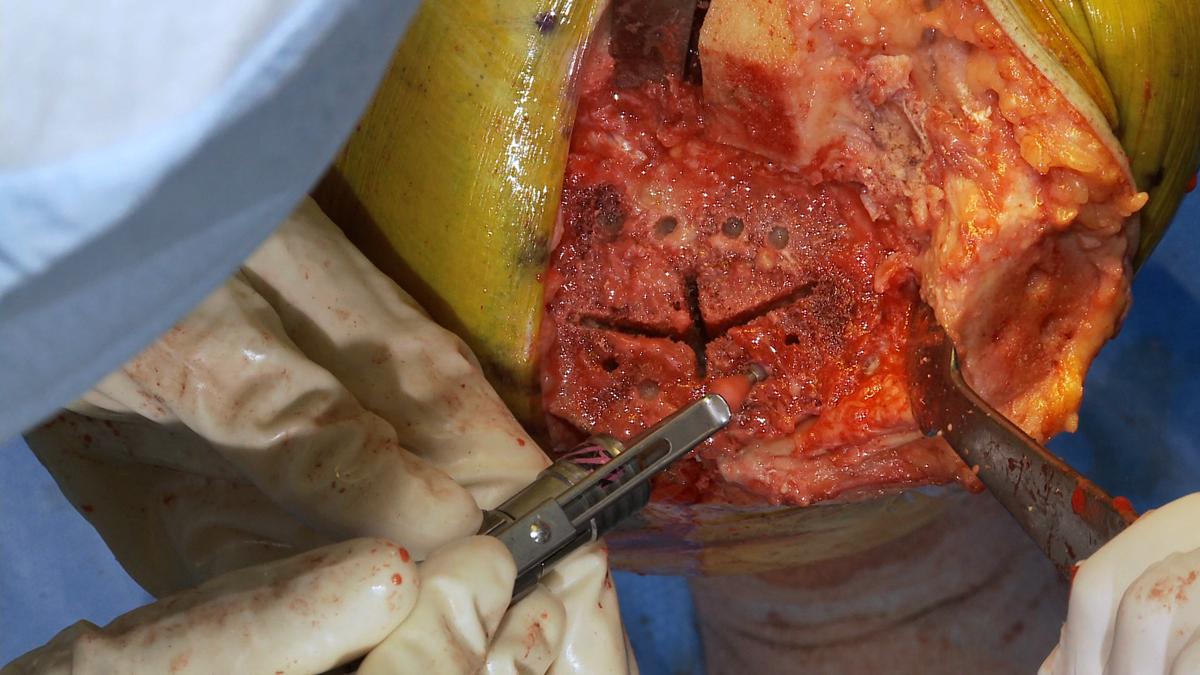 Cement Anchor Holes
Cement anchor holes are made with a bur so that the cement embeds into the bone, adding stability to the components. 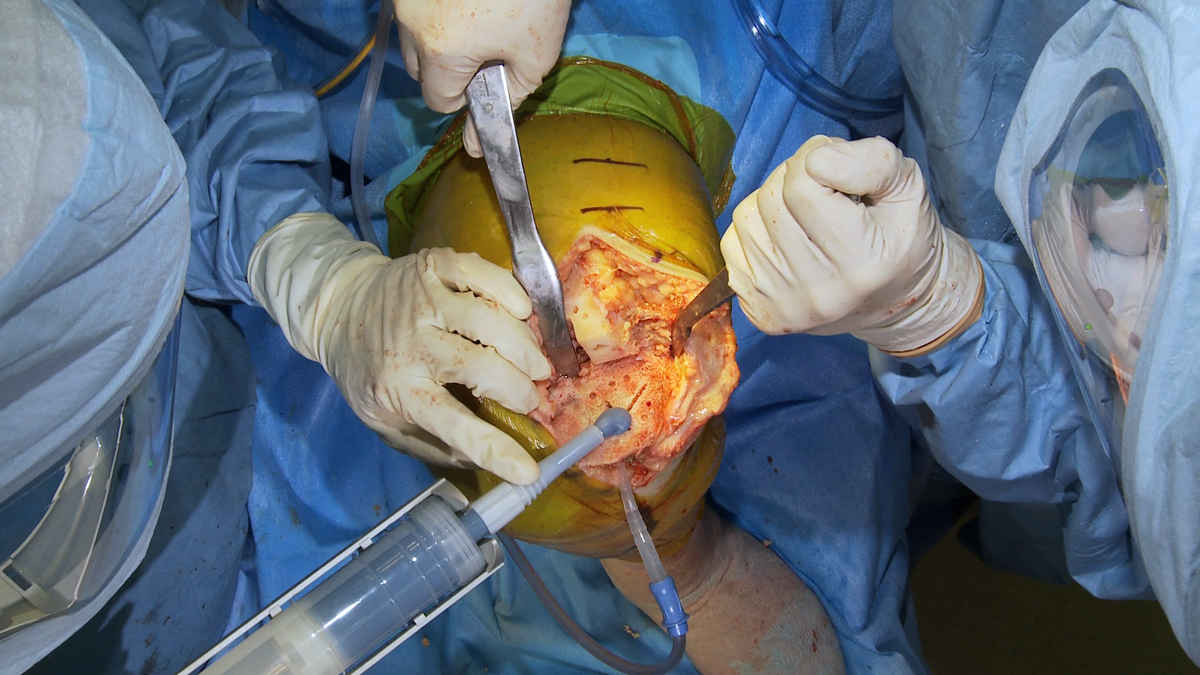 Cement Applied
Cement is applied to bony surfaces and the components are placed. 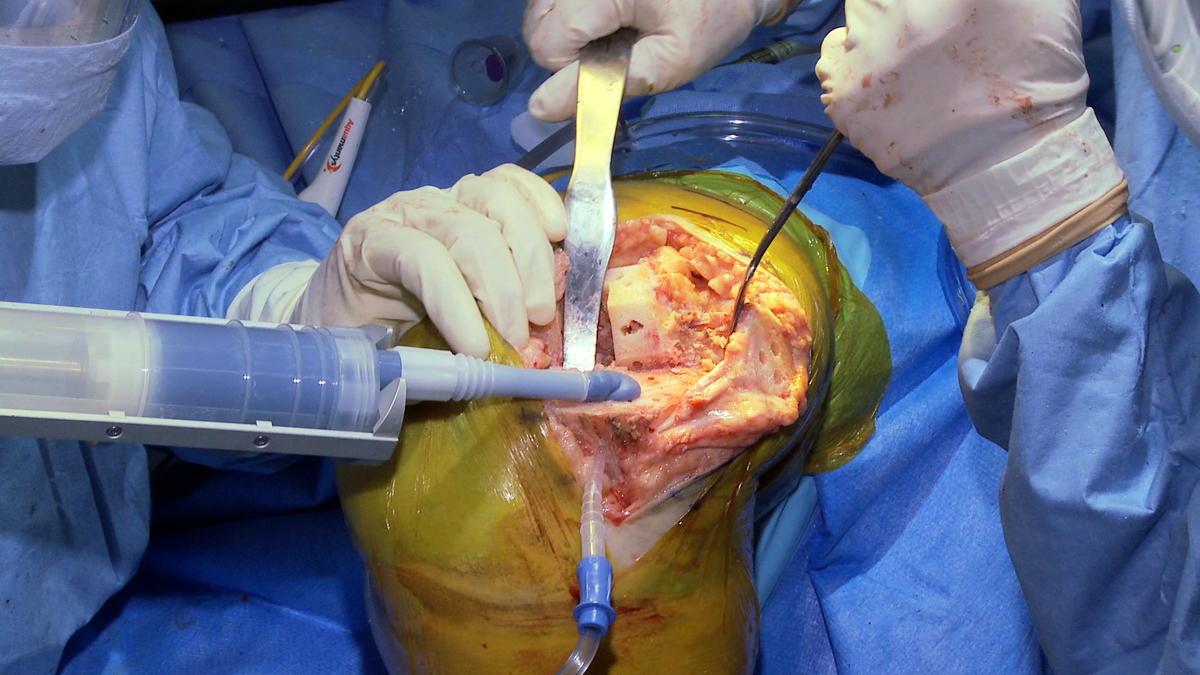 Lower Camera Angle in Total Knee Replacement
In a lower camera angle than the overhead, cementation is conducted in total knee replacement surgery. Note the Simms tip suction placed in a bony portal to help evacuate blood from the trabecular bone as well as coax cement infiltration. 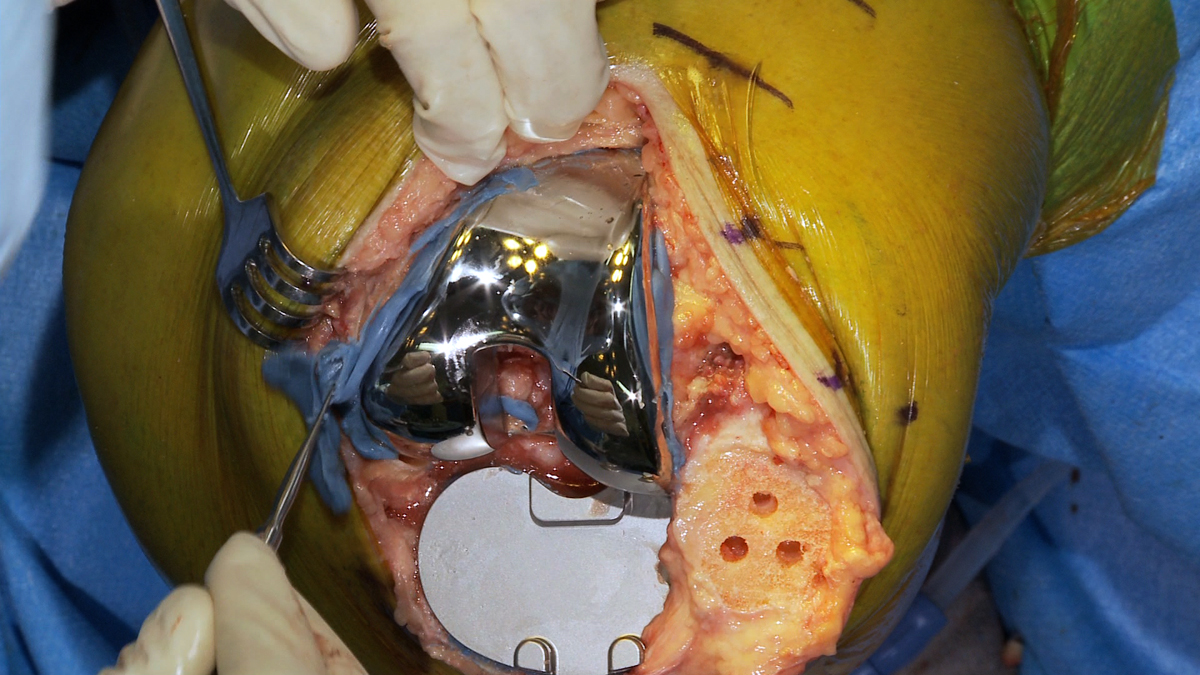 Excess Cement Removal
Excess cement is removed from all components in total knee replacement before it fully dries. 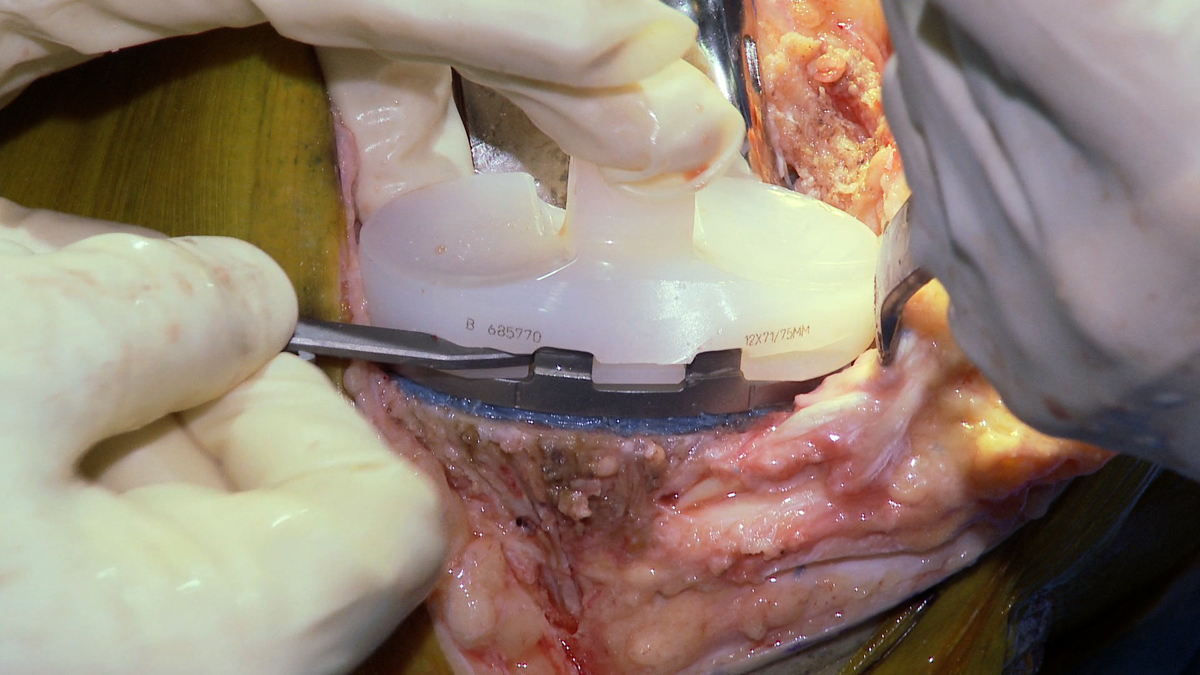 Tibial Tray Locked Into Tibial Component
From the lower camera angle the viewer can see the details of how the tibial tray is locked into the tibial component. 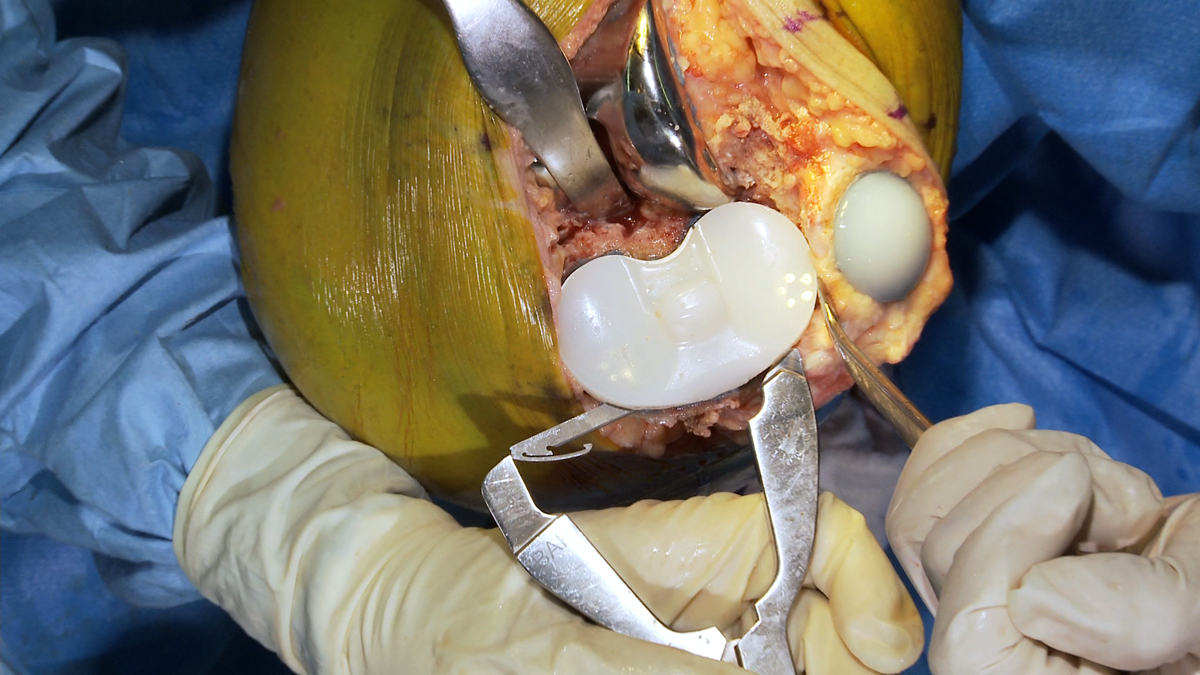 Overhead Camera Angle Tibial Tray Locking
In this overhead camera angle the tibial tray is locked into place. Using at least two cameras for most surgical procedures is essential. Also note the evenness of the lighting. This is obtained with the aid of specialized lights commonly called "sun-guns" in the video industry. However these lights must be used skillfully with other camera techniques in order to get this kind of shot. Visit Plexus.tv for more details.
Click on images in slideshow to view full size.